JBrowse has several track types that are designed for displaying alignment data, particularly from BAM and CRAM files. BAM and CRAM files used with JBrowse must be compressed and sorted by leftmost coordinate.

The JBrowse BAM parsing library makes extensive use of code from BioDalliance, while the CRAM support is based on the @gmod/cram npm module.

Introduced in JBrowse 1.8.0, Alignments2 tracks are designed to display alignment data, such as from BAM files. This track type shows basepair-level mismatches, insertions, deletions, and skipped regions between aligned reads and the reference, and highlights paired reads in red if their mates are missing.

Base mismatches are displayed based on the contents of the feature's MD field (containing a BAM MD mismatch string), and/or CIGAR field. If your BAM file does not contain MD tags, one common way to generate them is with the samtools calmd command.

Alignments2 is a faster implementation of the older Alignments track type that draws alignments using the HTML5 canvas. In the interest of speed, Alignments2 tracks do not display any text labels or descriptions alongside features, and do not draw arrowheads indicating strandedness, instead relying on color to denote the strand of alignments.

The most basic Alignments2 track configuration in tracks.conf format is

The above track template infers that the storeClass is a BAM store. Not all track and store types can do this inference but Alignments2 allows this

A pre-defined histogram e.g. from a bigwig can be defined on the Alignments2 track. Example

Alignments can be filtered by various BAM flags

Note: hideImproperPairs was introduced in 1.16.0 to disambiguate from hideMissingMatepairs. The "read mapped in proper pair" flag can have a mate but it is simply classified as a bad alignment by the aligner, JBrowse displays these as lightly colored

Note: colorBySize, colorByOrientationAndSize invoke insert size stats estimation, and only makes sense with paired read tracks. Many of these options are 1.16.0 and newer. See paired reads for more information.

Since JBrowse 1.11.3, there is a new coloring scheme for BAM files that allows for new coloring of paired end reads, such as a different coloring for unpaired reads and aberrant pairing split across chromosomes.

If this scheme is undesirable, the style->color variable can be overridden entirely as well, with a callback for example. Also see See paired reads for additional flags relavant to paired end reads.

Introduced in JBrowse 1.8.0, SNPCoverage tracks draw the coverage of alignment features along the genome, along with a graphical representation of base-mismatch (possible SNP) distribution, and tables showing frequencies for each mismatching base.

Like the other alignment tracks, base mismatches are displayed based on the contents of the feature's MD field (containing a BAM MD mismatch string).

Note: Since the SNPCoverage track dynamically calculates coverage and putative SNPs directly from alignment data, it is not recommended for use with very dense feature data, such as deep-coverage BAM files. For these types of files, it's recommended to pre-generate a BigWig file of the coverage and a VCF file of putative SNPs, and display those instead. 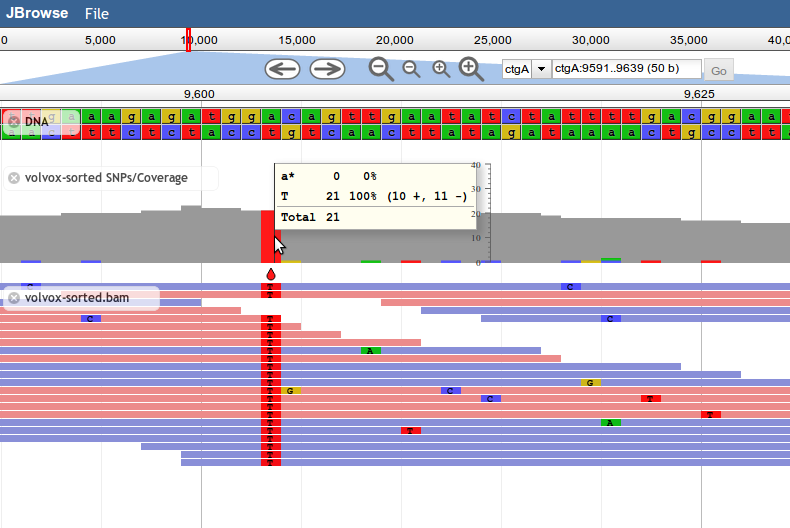 Note that urlTemplate will refer to a file relative to the "data" directory that you are using.

Introduced in JBrowse 1.7.0, Alignments tracks are an HTML-based track type for alignment display. They display everything that Alignments2 do, and also can be configured with right-click menus and strand arrowheads.

They display everything that Alignments2 tracks do, plus they support the same configuration options as feature tracks, including advanced clicking behavior, feature modification callbacks, and so forth. The price of this additional capability is that Alignments tracks are significantly slower when used with dense data such as deep BAM alignments.

Alignments2 is recommended over Alignments for most users.

Note: you can also increase maxFeatureScreenDensity if you get the "Too much data to show; zoom in to see detail".

If you are using the Apache web server, please be aware that the module mime_magic can cause BAM files to be served incorrectly. Usually, the error in the web developer console will be something like "Not a BAM file". Some packaged versions of Apache, particularly on Red Hat or CentOS-based systems, are configured with this module turned on by default. We recommend you deactivate this Apache module for the server or directory used to serve JBrowse files. If you do not want to deactivate this module for the entire server, try adding this line to your HTTPD config or .htaccess file: